Dedicated to the memory of K. H. Scheer and Walter Ernsting, who first gave us Perry Rhodan in 1961 and of Forrest J and Wendayne Ackerman, who first brought his adventures to the United States in 1969. 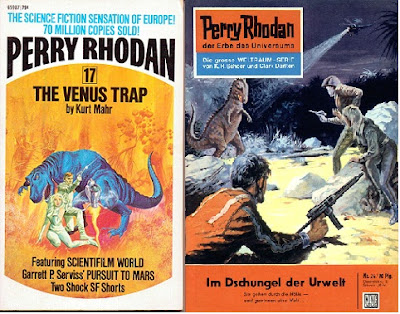 In a nutshell, we have a race between several groups to gain access to the Arkonide Venus Base and its technologies. Rhodan and his men win. All is well. Tomisenkov and his men remain on Venus as colonists.

Truthfully, I can't write a better succinct summary than that provided by Mark Golden at http://perryrhodan.us/php/displaySummary.php?number=24 , to which I cheerfully refer the reader rather than working up my own.
* * *
By the time I finished this book, I felt like I'd been slogging through the wilderness right along with them – and I don't mean that in any good sense, i.e. that the story was that engaging. Short as these books are, frankly I thought this one would never end. I definitely get the sense that by this point in the series the story is being padded out somewhat. I have a tentative theory as to why.

According to the Infallible Authority Wikipedia, in the beginning Perry Rhodan was conceived to run for thirty volumes. Of course, it has gone far longer than that, with no end in sight that I know of. I have wondered what the overall planned story for those thirty volumes was. If it was what would eventually become the First Cycle of the overall saga, The Third Power, that ended up being 49 issues. Perhaps early on, when the publishers realized they had a hit on their hands and determined to keep it going beyond the original plan, they started retooling stories that maybe had been outlined for a single issue so that they became two or even three issues in length. Of course, that would necessitate them hitting on what became the overall rhythm of the series, “cycles” of fifty or so issues, quite early on as well, which I'm not at all sure is the case.

Whatever, the past few books, “The Venus Interlude” I might call it, have definitely seemed like a whole lot of running around without a whole lot of progression to the story. I hope that doesn't remain the case. The next little group having to do with something called the “Mutant Master,” is something I've looked forward to reading since I was a kid. I previously related the synchronicity of my discovering Perry Rhodan ca. 1975 with my discovery of Marvel's New X-Men about the same time. Of course, at that time publication of PR was way past here – somewhere around Ace volume #70, and I only ever managed to scrounge up scattered copies of the earlier books during the next few years – not all of which I actually read. I don't think that the “Mutant Master” stories were any that I managed to acquire or read until last year when I embarked on this crazy Perry Rhodan Reading Project. I know them only from the tantalizing titles in the order forms at the back of the issues that I did have as I read forward to the end of the Ace/Master Publications era. I hope I'm not going to be so disappointed in these next few books as I have been with these just past.
* * *
Thematically at least, Gray Morrow's painting for the Ace paperback is probably the closest to Johnny Bruck's for the German magazine of any that I've seen. Of course, if Tomisenkov (?) is shooting at something he considers more threatening than the blue T. Rex looming behind himself and Thora, they are in deep trouble! (I must say, the UK edition has an interesting cover....)

Once again, there are no interior illustrations – well almost, but I'll get to those. As far as line drawings within the story itself, are those a thing of the past?

The first of two “Shock Shorts” this issue is “Ranger of Eternity” by Donald F. Glut. The unnamed hero, an anachronistic Space Ranger who has outlived his purpose, manages to have one last confrontation with his arch enemy and assure that “for all eternity there would exist a Space Ranger” (p. 117) – basically by creating a time loop.

Part 2 of the 1898 sequel to H. G. Wells' War of the Worlds that began last issue, Garrett P. Serviss' Pursuit to Mars, contains two more chapters, 3 and 4, “The Monsters on the Asteroid” and “A Golden Planetoid” respectively. The force from Earth has its first encounter with the Martians, a group stranded on an asteroid. There is a battle, they capture one of the Martians, and discover that the asteroid is of pure gold – and that another force of Martians is approaching. One interesting point – besides the fact that in the age before radio the Earth ships must communicate with each other via other means, mainly flashing lights – is that the writer had no conception of what explosive decompression in the vacuum of space would do to the human body. The only danger identified is that of asphyxiation when the air rushes out of a hulled ship. A rescue party from another ship has time to put on space suits and rescue some of the victims in time for them to be revived.

After a subscription offer and a blurb for future “Shock Shorts,” we get the second “Shock Short” for this issue, “A Martian Oddity” by Weaver Wright. Look, I know FJA does not have a monopoly on bad puns, but reading this story that is filled with groaners based on Martians misunderstandings of Earthly sayings that they heard on radio in advance of the first men to travel to the red planet, e.g., “a burp in the hand is worth two in the bush” (p. 150), that lead to the death of said human astronauts because “one man's meat is another man's poison” (p. 151), inevitably made me wonder, “Who is Weaver Wright?” Sure enough, searching for Wright on Wikipedia redirects you to its entry on Forrest J. Ackerman and lists that name first among a rather lengthy list of pen-names Ackerman used, which includes “Dr. Acula,” and proclaims itself “incomplete”!

The “Perryscope” letters column is followed by two black and white photos that are of such poor quality that it is only the captions, “The Brain of Uranus” and “The Monster of the 7th Planet,” that reveal them to be associated with the movie summarized in “Scientifilm World.”

Next up (but I'm not sure how soon), #18, Menace of the Mutant Master. It's gotta get better from here, right?

Sources of Images and Other Information

Kent G. Hare
a.k.a. "absentminded- professor" - Professor of Early European History at a small state university in Louisiana, married, one son, a variable number of cats. More to the point, a lifelong fan of heroic tales of all stripes, especially the greatest heroic tale ever told.

My other blog on the other stuff I read: